Happy Labor Day to all of my readers in the United States, and a Happy Typical Monday to the rest of my readers! In between mall shopping and grilling a few hamburgers, I thought I would take a few spare moments to honor the true meaning of the holiday and discuss my labor of love… writing.

First of all, the big news. I finished the first draft of The Curse Merchant last night! I was expecting a greater catharsis than I experienced, but I typed out the final sentence, made a Tweet to brag, and shut down my computer and joined my wife and her sister for one of my favorite Cary Grant movies. By the way, it was mind boggling hearing the term “dope fiend” in a movie shot in 1944. My usual euphoric exuberance gave me a miss, however, and I felt somewhat cheated by that. Perhaps after having written six novels (two in the last twelve months alone), I’ve come to a place where I more fully appreciate what the end of the first draft really means. 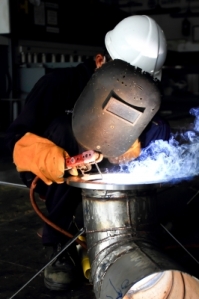 After I finish welding these plot holes, I'll take an angle grinder to that dangling participle...

I began my fifth novel, working title of Omnipotence, in November of 2010. I completed the first draft in March of 2011. I resolved to sit on that first draft until I “fell out of love with it”, some advice I gained from Orson Scott Card. There is much to cut, much to rework, and much to polish on any first draft, and having any significant emotional ties to the baggage only makes it more difficult to be rid of it. Thus, I stuck it in my digital sock drawer until I finished my next novel.

Which was The Curse Merchant. I began outlining it immediately (truth be known, I was obsessing over the prewriting for Curse Merchant before I finished Omnipotence), in March of 2011. I began drafting in May, and took a four week break for a trip to Germany and to take my beer judge exam. I have now completed the first draft of Curse Merchant in the first week of September.

My plan is to immediately dive into the first revisions of Omnipotence, which after a long discussion with my wife is looking like it will entail a great deal of rewriting. I have no clue how long the first revision to Omnipotence will take, but I suspect it will be much longer than the single month I had planned.

In October, I will be taking a six-week course at Frederick Community College on manuscript editing, taught by Meredith Bond. I plan to bring the first pages of Curse Merchant in to that class for the group assignments, exposing it to the eyes of utter strangers. During this time, I suspect I will be in the thick of Omnipotence. At the end of this process, I’ll have a second draft of Omnipotence, and will likely need to reexamine the changes made. After I give the new version a good kick in the syntax, I’ll be looking for beta readers to catch what my wife and I couldn’t.

After that point, my plan is to begin outlining my next project, a western horror. That, I feel, will take me solidly into 2012.

So, there’s my immediate plan. I’ll post more thoughts on long-term plans on another day. But for now, the grill is calling my name!

One response to “Labor (of Love) Day and Plans of Attack”