And as a finale to the photo tour for The Curse Merchant, one of the darkest locations… perhaps the strongest display of the dichotomy between what is real and what lies beneath.

I looked out my window, watching as the taller buildings of downtown Baltimore cast their shadows over us. This wasn’t going to be a long drive.

“Do you have any advice for me?” I asked.

“For talking to Osterhaus.”

He cocked his head and considered the question for a moment, before responding, “Be polite.”

He drove up Light Street and stopped in an alley between a tall bank building and a red brick row house. I tried to step out, but the door was locked. I had to wait until Malosi opened the door from the outside.

Once free of the Cadillac, I looked up and down Light Street, the clear sky above slowly succumbing to a front of overcast clouds. Malosi gestured me towards a flight of steps dropping below the street in the alley, leading to a basement entrance to the red brick building. At the base of the steps was a thick iron door with a wrought bronze knocker. Malosi pulled the handle and pushed the door open with a loud scrape.

Imagine peering down this alley… 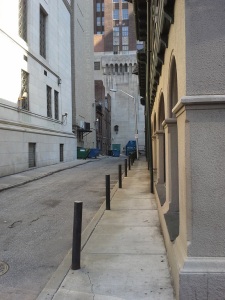 And approaching this doorway…

Osterhaus’s office is described as a basement entrance, but when I found this little gem down the actual Light Street in downtown Baltimore, I felt I had adequately captured the feeling of the old world lurking just beneath the modern world. In fact, I took this photo as I looked straight up…

At the feet of the normal world, in an old back alley office, tucked away behind the busy streets and the pedestrians… what exactly is being bought and sold? This is the very essence of The Dark Choir series. I have to admit, I hustled back to my car after taking the photo. My skin was crawling.

I hope you enjoyed this little excursion. Now back to the writing dungeon where The Curse Servant is already underway. Spread the word… if you’ve read The Curse Merchant and enjoyed it, tell a friend or two!

Thanks again, and I’ll be chatting with you soon.