Sometimes the words simply flow from the fingers like a poorly conceived analogy involving a fire hose. Sometimes those fingers are dead weights, just sitting on the keyboard trying to muster the strength to move. Sometimes it happens all in the same writing session, which is as frustrating as it is baffling.

I’ve suffered some bouts of Scriptus Interruptus this week, not that it’s an unusual occurrence. But what I’d like to share with you today is how I broke through my personal creative log jam and started hammering out pages like a slightly better-conceived power tool analogy.

I’ve stated before, almost exhaustively, what a fan I am of planned writing. I have outlines, spreadsheets (Jesus God, the spreadsheets!), character sketches, even organized playlists to help center my thinking. It’s a left-brained Wonderland in my writing dungeon. 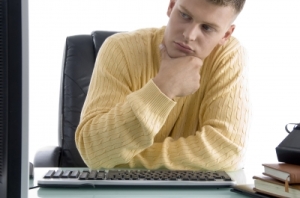 I’m elbow-deep in The Curse Servant’s first draft, and by God I’ve got that sucker outlined. Granted, shortly into the third chapter I had to dramatically re-structure my outline thanks to one or two good ideas that popped up. And by Chapter Ten I realized that my entire outline was, in fact, only Act II, and this sucker was ballooning out of control.

All right, I’ll admit it. My outline was useless one week into drafting. I spent more time trying to tie things up on my spreadsheet than I did generating words. This led to spiraling doubt and confusion, the net result of which was unproductive writing sessions and a general sense of doom and dread.

Then Memorial Day weekend happened. I spent my time in the swimming pool, cutting grass, washing off the smell of sunscreen and chlorine, smoking ribs, and noodling around like a feckless layabout who didn’t have a damned novel to write. Here’s the great thing about mindless, repetitive activities such as lawn mowing, tending charcoal, and taking showers. You tend to block out your own brain.

It was a God send.

When I stopped thinking about my book, I started imagining it. And it really sank in this weekend when I specifically set aside time to daydream my way through my story instead of trying to engineer it. I cranked out ten thousand words in three days, which with my life schedule is above average. It seemed the key to getting over the creative lethargy was to reconnect with the right side of my brain.

So, a word of caution to all of the visitors to my blog who check in on my spreadsheets (yes, I see you over there!)… don’t get too hooked on the formula. Invest time doing nothing, opening up that chest of wonders inside your imagination, and just baste in it for an hour or so. Then see what come out!